An architectural gem in the Lake County community of Howey-in-the-Hills attests to Ernest Hemingway’s oft-quoted remark “The rich are different.”  To wander through the 20 room mansion built in 1925 by the community’s founder, William J. Howey, and stroll over the 15 acres surrounding, brings a nostalgic feeling of how “Once upon a time--.” 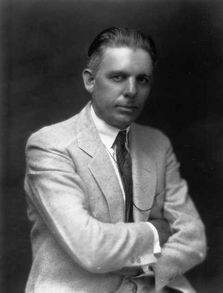 William J. Howey purchased 60,000 acres in Lake County by 1920, founding the town that was to bear his name five years later.  Following his previous formula for success practice in Polk County, he planted citrus on the majority of his newly acquired acreage.

Unlike many purchasers of Florida property in the ensuing boom years, Mr. Howey was not a speculator, but a land promoter who used the fledgling citrus industry of Central Florida as his economic base.  Therefore, in 1924, he and his wife, Mary Hastings Howey, completed the plans for their permanent home in Howey-in-the-Hills, and by the end of 1927, the show place was finished, furnished and occupied.
​
The architect was Katherine Cotheal Budd who during World War I had designed temporary lodgings for women who visited male relatives at military training camps.  The “hostess home” idea was a new concept for that time, and Budd is credited for giving 72 lodgings a homelike atmosphere.  The Howey home is possibly the only existing example of her work. 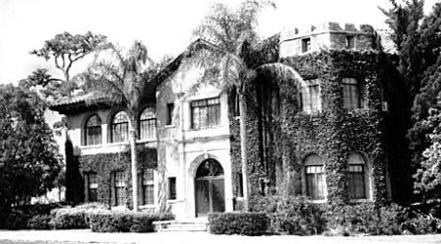 Designed in Mediterranean Revival style, the house is set back on a wide lawn approached through wrought iron gates and a lengthy horseshoe-shaped drive.  The time-mellowed rose stucco walls are almost completely covered with glossy-leafed creeping figine.  The roof is a barrel tile roof utilizing Ludiwigi tile. The entrance features an elaborate bas-relief frontispiece which extends two full stories and incorporates two openings – an arched double doorway topped by a square casement window. The arched doorway has screened double doors surmounted by a fanlight of screen and ornamental grille work.
​
A second doorway, opening directly into the foyer, has a magnificent semicircular fanlight inset with a peacock plumage design of multi-colored stained glass with panels of diamond-patterned stained glass outlining the sides of the door.  Much of the woodwork on the first floor is pecky cypress, including the massive front door. 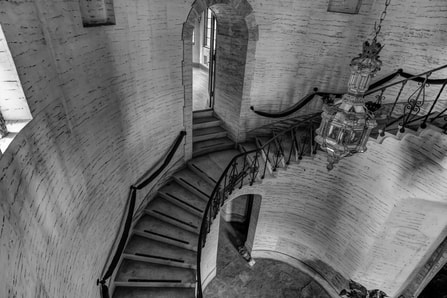 The foyer with curved walls rising to the second story is dominated by a wide graceful curving stone stairway with a wrought iron banister.  The wall surface of the foyer and lower hall is of pre-cast plaster. The Austrian artisan, who compounded and poured the wall surface mixture right in the foyer, did so to complete secrecy, banning all other workmen from the house and locking doors.

Three immense fireplaces, a ballroom-size drawing room, massive beamed ceilings and the servant call-bell phone system are not surprising architectural styles and convenience refinements to see in a house of this size.  The unexpected is what delights the eye and creates visual images.  For instance, a cozy breakfast room is built in the tower on the backside of the mansion, entered midway up the main staircase and serviced by an enclosed stairway and dumb waiter from the butler’s pantry on the first floor. 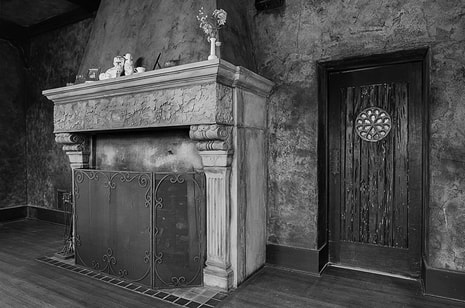 The library, situated directly below the breakfast room, is also of small dimension.  The wall space is divided between built-in shelves and arched windows which face a grass carpeted courtyard with a fountain-fed lily pool.  The de rigueur hidden passageway, so popular in large older homes emanates from behind a sliding bookshelf panel in the library.  The doorway that the concealed latch opens is located outside the library, lending even more intrigue to the basement room that may have served as a liquor cache during Prohibition times.  Whatever it contained must have been considered valuable, as the door is a fireproof, tumbler locked bank vault type.  That it was a strong house as well as a beautiful one there is no doubt.  Some of the inner walls measure over a foot thick and both wood and stone floors are tight and smooth; even today, the heavy doors swing silently and close snugly.

An innovator in the citrus industry, Howey was one of the first growers to ship fruit to England from Florida.  His home is located across the road (Rt. 19) from the golf course (now Mission Inn Golf and Tennis Resort) and his candidacy for Governor on the Republican ticket in 1932, led to various notable visitors to the Howey home.  Among them were Lord Bathhurst of England, H.B. McNeal, publisher of Golfer’s Magazine, golf master Chick Evans, Kansas Governor Alfred Landon, Mr. and Mrs. Frank Phillip’s of petroleum fame and President Calvin Coolidge who was guest of honor at an all-male dinner party in February 1930.​​ 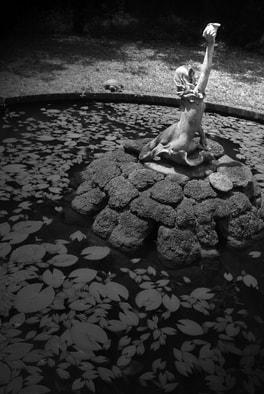 Within the 15-acre grounds, referred to as “The Park,” are many varieties of botanical plants and lush shrubbery.  Located on the grounds is a simple Georgian marble mausoleum where William J. Howey (1938), a daughter, Lois Valerie Howey (1941), and Mary Hastings Howey (1981) are buried.  A surviving daughter, Mrs. George E. Smith, Jr., resides in Eustis.

“The Park was the scene of an open air concert performed by the New York Civic Opera Company on March 6, 1927.  Those attending, estimated at 16,000, arrived in 4,000 automobiles.  An area newspaper reported “In all Florida history…never has there been anyone who has attempted to bring a musical company of such prominence to give a concert at his own expense so that the people could have the opportunity of hearing some of the finest operatic stars … impossible had it not been for the generosity and thoughtfulness of W.J. Howey …” From the same article it was noted, “…The greatest applause was when W.J. Howey was introduced, the applause ringing and ringing until it echoed from miles around.”

The time for a show place mansion such as the Howey House may be past; the lifestyle it encompassed, bypassed by jet-paced modernity, and yet it should remain to remind us that “Once upon a time…”